A mysterious knife that does its fatal work without the aid of human hands... An embezzler who hides his stolen money and then finds getting it back is a life's work... A kooky murderer who thinks he is Sherlock Holmes and solves his own crime... A beautiful woman who enters a house on a snowbound hilltop and impossibly disappears... 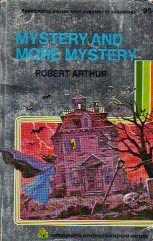 Originally published in 1966, Mystery and More Mystery is a collection of Robert Arthur's most loved short stories. Featuring 10 tales of varying length the book merges locked room mysteries, impossible crimes, and classic detective stories. I have reviewed each of the impossible crime stories below, though the more traditional mysteries should also appeal to fans of the genre.

The Blow from Heaven
An old lady sleeps alone beside a ceremonial knife. With no-one else in the room, the knife plunges into her chest and kills her.

A simple but neat impossible crime, The Blow from Heaven introduces us to a world of magic, conjuring and possession. While the solution may be easy to spot, the eerie set-up leads to a perfectly readable short story.


The Glass Bridge
Seen entering a house perched on a snowy hilltop, an unfortunate woman is never seen again. With only one set of footprints leading to the house, how can she have left without leaving a trace?

One of Arthur's better known works, The Glass Bridge features a classic impossible crime conundrum - the woman is not in the house, but there's no way she could have left without leaving tracks. Arthur's solution is ambitious and unique, but stretches believability to breaking point. An interesting read nonetheless.

The Vanishing Passenger
A man is murdered in a train cabin, but his killer has vanished from the train. With the smallest of clues to work with (a single strand of hair and a waft of an expensive perfume), the team try and decipher who committed the crime and how they escaped.

While the method of "escape" is fairly rudimentary, this story presents a humorous and entertaining portrayal of the detection process.

The Adventure of the Single Footprint
When the head of a weapon manufacturing firm is found dead in his home, the authorities' first thought runs to suicide. With twelve feet of barbed wire fencing surrounding the entire complex, there seems to be no way a killer could have gained access to the room. It's only when a mentally ill family member - believing himself to be Sherlock Holmes no less - is consulted that the facts begin to come to light.

An interesting approach to contributing to the Sherlock Holmes canon - portraying a man believing himself to be the infamous detective rather than the man himself - provides a nice twist on the formula. Complete with baffled police, insightful observations and unapologetic arrogance, the story features all of the hallmarks of a traditional Holmes tale. Though it may have benefited from a more complex impossible crime, Robert Arthur's work is every bit as clever as the other Arthur's.

The Mystery of the Three Blind Mice
With the head of the household shot from the neighbouring property, every witness is a potential suspect. But how did the killer manage an accurate shot from 300 feet through high winds and waving tree branches?

Though the impossible crime aspect of the story only accounts for a a portion of the running time, the solution is an elegant and ingenious one. As with the best locked room mysteries, it is both incredibly simple yet very difficult to spot. The rest of the story will appeal to fans of riddles, but it's the first half that should impress any locked room mystery aficionado.

Other stories that do not feature an impossible crime include: Mr. Manning's Money Tree, Larceny and Old Lace, The Midnight Visitor, Change of Address, and Hard Case. Primarily focusing on a big reveal or twist ending, these are often equally or more enjoyable than the locked room stories within the book.

Mixing impossible crimes with traditional mystery stories, Mystery and More Mystery should contain something for everyone to enjoy.

Mystery and More Mystery is available on Amazon (UK) and Amazon (US) in paperback and hardcover editions.
Posted by Unknown at 6:26 PM