Whistle Up The Devil by Derek Smith

A man seals himself in a room, with both the window and the door under constant guard. Despite the precautions, a mysterious killer stabs him in the back and vanishes without a trace. To compound the confusion a potential suspect is later killed in a prison cell, despite no-one having access to the jail... 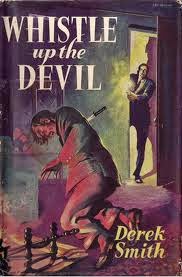 First published in 1953, Derek Smith's novel Whistle up the Devil contains two interlinked impossible crimes that pay homage to the likes of John Dickson Carr and Clayton Rawson. The story follows amateur detective Algy Lawrence as he investigates the mysterious death of Roger Querrin. With both the detective and the police standing guard outside Querrin's room at the time of his death, the disappearance of the killer raises suspicions of a supernatural murderer. Like many of the classic impossible crime tales, Lawrence is determined to prove there is nothing at all supernatural about Querrin's death.

The set-up follows many of the traditions of the genre - the victim seals himself in a room in his house, recruiting several members of law enforcement to stand guard and ensure his safety. Inevitably the plan fails and Querrin does not survive the night, leaving the witnesses wondering just how a killer could have passed them. As the primary protagonist Lawrence makes for an appealing investigator, though does suffer a few character flaws that are discussed in more detail below. In general his interactions with the witnesses and the local police are entertaining and well-paced, resulting in a book that never lulls in its pursuit of the logical explanation for Querrin's death.

The solution to the murder, in addition to a later impossible crime involving one of the suspects (murdered in his prison cell, despite the only entrance to the cell block being in full view of Lawrence at the time of death), is well constructed and clearly explained. The mystery of how the crimes could have been accomplished stayed with me until the final reveal, which is testament to Smith's intricate plotting and clever use of the traditional locked room mystery tropes.

Despite the ingenuity of the crimes, Whistle up the Devil does have a few shortcomings. Smith's portrayal of women throughout the book teeters dangerously towards indelicate, as the insatiable detective instantly falls for the victim's wife. The female characters never feel as interesting as the males, primarily serving as objects to be lusted after or damsels to be saved. It's a distracting approach, though could be attributed more towards the style of the time rather than the intentions of the author. Either way it feels a little dated now.

The final chapters of the novel, despite featuring an excellent run-through of the murder method(s), also suffer from Smith's chosen style. A number of the characters extract a confession from the culprit (in a fairly involved manner that over-complicates what should be a simpler plot point), and tensions are raised in a burst of violence. All the while the Smith refers to the culprit with terms such as the "assassin", "killer", etc, to disguise the identity to the reader throughout the sequence, despite the character being in full view of Lawrence & co. It's a small complaint, but the segment jars with the rest of the book and feels a little like cheating the audience. While the revelation of the murderer's identity does come as something of a shock, the impact is diminished by the overly extended section teasing the audience with what the other characters already know.

These are small criticisms of a book that successfully nods to classic locked room mysteries, while presenting a solution that is (to my knowledge) unique. Whistle up the Devil expertly balances the complexities of the mystery with elegant solutions, and progresses swiftly with a tightly plotted story.


A welcome entry to the impossible crime genre that can stand proudly with the stories it attempts to emulate.

Whistle up the Devil is available as part of the Derek Smith Omnibus on Amazon (UK) and Amazon (US) in both Kindle and paperback editions.
Posted by Unknown at 10:13 AM