The Problem Of Cell 13 by Jacques Futrelle 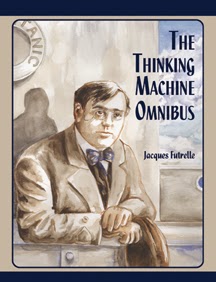 I find classic mystery stories a bit of a mixed bag. On the one hand many of them feature problems and solutions that were the first of their kind, but on the other many of the ideas have been iterated upon and improved by later authors. The language and pacing of stories written a century ago also takes a little getting used to.

This week I've been (re)reading one example that falls foul to none of these issues - The Problem of Cell 13 by Jacques Futrelle. Originally published in 1905, the short story focuses on Augustus S. F. X. Van Dusen (a.k.a. "The Thinking Machine"), who bets his friends that he is able to escape from any prison cell while treated as any other prisoner. The plot follows his exploits as he is taken up on his bet.

The Problem Of Cell 13

The short story is available in its entirety for free at Futrelle.com or Project Gutenberg Australia. If you want to read on your Kindle you can download it here (send to Kindle instructions here).

The story wastes little time setting up the concept, and speeds along at a decent pace. Once Van Dusen is imprisoned the perspective switches primarily between him and the warden, which provides a great balance of telling the reader all they need to know while keeping us entirely in the dark. Van Dusen's mix of intellect and Holmesian detachment stays just the right side of arrogant, and the "problem as a bet" mechanic works well to set up the concept.

As with all locked room mysteries, the strength of the story primarily depends on the ingenuity of the solution. Prison cells present the ideal scenario for such stories, however rarely appear because they are so bloody hard to get out of. Futrelle teases us throughout with smaller mysteries such as the changing money and the various notes, before offering a fantastic explanation that brings together many of the oddities that pepper the story. It is these minor riddles that really makes The Problem Of Cell 13 a classic mystery. Not only are we presented with a protagonist able to escape from a locked room, but also one that can materialise writing stationary and swap money at will.

Utilising the rats does involve a certain amount of luck, requiring a slight suspension of disbelief from the reader. The ending of the story is also quite abrupt, and it would have been nice to have a paragraph or two closing off the experience. Both of these minor quibbles are far outweighed by the quality of the mystery, which is widely considered as one of the best of its kind.


The Problem of Cell 13, in addition to many other stories featuring Professor Van Dusen, is available on Amazon (UK) and Amazon (UK) as part of The Thinking Machine collection.
Posted by Unknown at 10:40 AM