Shipping magnate Laurence Wilberforce is murdered in his study. With the door locked and bolted from the inside, how can his killer have escaped? 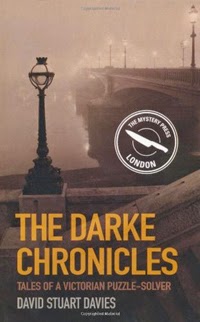 David Stuart Davies is a British writer known for his various additions to the Sherlock Holmes canon. The Darke Chronicles, one of Davies' novels missing the famous detective, follows amateur sleuth Luther Darke as he investigates weird and wonderful cases in Victorian-era London. The Curzon Street Conundrum is the first of seven stories, and is available for free as a preview to the novel.

In the story the wealthy businessman Laurence Wilberforce is found stabbed in a sealed room. With no windows or possible routes of escape, it seems that the killer has vanished from the scene of the crime.

The short story is available in its entirety for free at Google Books.

The Curzon Street Conundrum, despite featuring a very brief prologue from the perspective of the dying victim, takes a little while to reach its core concept. When it does, however, the set-up is a classic one. The victim has been stabbed, the room was most definitely sealed, and suicide looks very unlikely. We follow Darke as he is led through the details of the case, talks to the various suspects, and eventually reaches his conclusions on the method.

The solution, while simple, is a satisfying close to the story. The impossible is quickly revealed to be quite rational (plus somewhat devious), with a method that even John Dickon Carr overlooked (his seminal Locked Room Lecture can be found here).

Davies' writing fits comfortably within the era in which it's set, and I was quite surprised to find the publication date so recent. Similar in style to many of the great writers in detection's "golden age", the story effortlessly conveys an authentic Victorian backdrop to accompany a solid mystery.

7/10 - An elegant and novel solution to the classic locked room mystery concept.


The Darke Chronicles is available on Amazon (UK), Amazon (US) in both paperback and Kindle formats.
Posted by Unknown at 6:15 PM