The Hollow Man (The Three Coffins) by John Dickson Carr

A man is killed in a locked study surrounded by undisturbed snow. The killer vanishes, and leaves no footprints. Shortly thereafter another victim is killed, this time in front of witnesses on a snow covered street. Yet again, the murderer is nowhere to be found, and only the victim's footprints lead to the body... 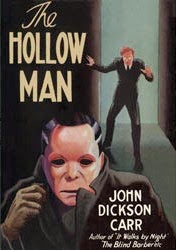 The Hollow Man (published in the U.S. as "The Three Coffins") is one of JDC's most critically acclaimed works, and in 1981 was voted the best locked room mystery of all time by a panel of mystery authors. The plot follows Dr. Gideon Fell as he assists the police in uncovering the truth behind two interconnected impossible crimes:

Motive is often an overlooked aspect of many impossible crime stories, however the crimes of The Hollow Man centre around the fascinating story of three brothers escaping from a plague-ridden Hungarian prison. While much of the story is told in retrospect, the intricate plot allows Dr Fell a number of Sherlockian observations that translate into a backstory worthy of the final solution.

The book, in addition to its various awards, is famous for the chapter dedicated to "The Locked Room Lecture" (you can read the lecture in another post here). In it, Carr demonstrates his mastery of the genre by detailing many different methods of a locked room mystery. To add to the achievement, the reader is still left in the dark over The Hollow Man's two impossible crimes even after reading the various solutions.

The method, when eventually revealed, leads the reader through the set of rational events that resulted in the two crimes. The explanation of Pierre Fley's death is particularly elegant, though both solutions are intertwined. A few coincidences do start to creep in, but the outcome offers a rewarding explanation that most readers should find a satisfying close to an ingenious mystery.

If there's any criticism to level at The Hollow Man, the story is primarily told instead of experienced. While the detectives stumble upon the crime in the first few chapters, the rest of the story is told through dialogue and discussion as they piece together the solution. The approach does feel a little dated when compared to more action focused recent mystery novels, but does allow for a deeper insight into the crimes and the motives behind them.

It's easy to see why The Hollow Man is a favourite of impossible crime fans. The solutions are complex enough to maintain the mystery for readers familiar with the genre, but logical enough to form a satisfying explanation that finally enlightens us. The plot proceeds at a respectable pace, with each chapter adding another layer to the story before each is peeled back in the final reveal. Though the style now feels a little dated, The Hollow Man is a classic read for anyone interested in locked room mysteries.