Compiled by Douglas Greene and Robert Adey, Death Locked in is an anthology of locked-room mysteries. Featuring stories written across the centuries, the book provides some insight as to the origins of the genre, development during the "golden age of detective fiction", and a few more recent examples. Each story is preceded by an introduction to the author, and a brief description of the context in which it was written. 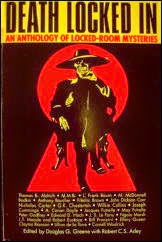 The body was found in a room with the door locked and the windows sealed from within. Only the corpse is there. Clearly murder was done, but where is the murderer? Who could have done it? That's the classic locked-room situation, the impossible crime.

That too is why the locked-room story never ceases to delight and entertain us. The absolute master of the genre, John Dickson Carr, once wrote that the detective story has three qualities seldom found in the thriller: fair play, sound plot construction, and ingenuity. And in no other form of the detective story is ingenuity as important as in the locked-room crime, for it is here that the author challenges the reader to what Carr called "the grandest game in the world". Not just whodunit, but how?

Since the 19th century, tales of impossible crimes have exerted a fascination upon authors and readers alike. The corpse in a locked room is just a starting point. How about a person entering a house and then completely disappearing? Or the body found strangled in the middle of a beach surrounded by unmarked sand?

In DEATH LOCKED IN, ingenuity faces the impossible. The gates of the unknown are thrown open, ghosts walk, and witches's curses seem real. Crimes are committed that have no rational, human explanation. Or so it seems ... until the most ingenious of detectives appears on the scene. Sound interesting? Then come on in. One thing is certain: you won't need a key.

At over 550 pages, Death Locked In is fantastic value for any mystery fan. The sheer quantity and variation of the stories is superb, and the small nuggets of insight by the editors before each mystery are both interesting and well-researched.


Any anthology relies almost entirely on the quality of its entries, so I have included a brief synopsis and review of each of the stories below.

The First Locked Room by Lillian de la Torre
Three women are killed in a locked bedroom. Two died in their sleep, and the third succumbed after a struggle. If the third killed the other two, then who killed her?

Not overly easy to follow, but features a satisfying solution to a classic locked room mystery.

Passage in the Secret History of an Irish Countess by Joseph Sheridan Le Fanu
Story and full review available for free here.

Told from the point of view of the "victim", this is more psychological horror than impossible crime. Enjoyable nonetheless.

I can Find My Way Out by Ngaio Marsh
An actor is gassed to death in their dressing room. With no access to the room, how can someone have pumped the gas in?

Takes quite a while to get going, and concludes with a gimmick that is not worth the delay.

The Suicide of Kiaros by Frank Baum
Story and full review available for free here.

Technically features a locked room, however any mystery is removed as the story is told from the perspective of the criminal.

The Spherical Ghoul by Fredric Brown
A body is mangled within a locked morgue.

The solution is similar in concept to Arthur Conan Doyle's "The Adventure of the Speckled Band" (available here), and shares the same shortcomings.

Out of His Head by Thomas Bailey Aldrich
A woman is killed in her apartment, but the windows are sealed and the room is locked.

While the solution may be a bit of a cop-out, the instability of the narrator makes for some interesting reading.

Murder by Proxy by M. McDinnell Bodkin
Featuring an intriguing private detective, this story involves a man being shot in a sealed library.

The method of murder, while intriguing, has been used in a number of better mysteries.

Out of This World by Peter Godfrey
A man enters a cable-car alone at the peak of a mountain, then is seen with a knife in his back by the time it has descended to the midway point.

A clever concept and an interesting story. The inclusion of semi-religious suspicions gives flavour, but the victim predicting his own death is an unnecessary addition that threatens to give away the solution.

The Mystery of the Hotel de L'Orme by M. M. B.
When a woman is killed in her locked bedroom, the only possible suspect is the girl in the adjoining room.

An overly simplistic solution taints what otherwise is a well-written story.


The Magic Bullet by Edward D. Hoch
Alone within a bulletproof car, a political ambassador is shot in the head. With no powder burns or trace of a weapon, his killer must have used a "magic bullet".

The unique setting - a ambassador travelling across a bridge to negotiate peace during a civil war - provides a fascinating backdrop to this impossible crime. Tension mounts as the repercussions of the death could resonate for the entire country.

A tense and taut mystery that veers towards psychological horror.

The Room with Something Wrong by Cornell Woolrich
A hotel guest throws himself out of the ninth floor window in an apparent suicide. Shortly thereafter, a second does the same. When a third guest falls victim to the room, the head of hotel security decides to take matters into his own hands...

One of the longer stories in this collection, this novella features a neat concept that keeps the reader guessing until the end. The mounting tension as the protagonist becomes obsessed with the room, as well as his various attempts to identify the problem, provide an exciting and rewarding core to an engrossing mystery.

Invisible Hands by John Dickson Carr
A woman is strangled on an undisturbed beach. How can the assailant have reached her, let alone escaped, without leaving footprints in the sand?

A brief howdunnit with a simple but slightly unbelievable gimmick.

The X Street Murders by Joseph Cummings
A man is shot three times in a locked room. The murder weapon is found shortly thereafter - in a sealed envelope that has been in full view of those outside the room the entire time...

Not only does Joseph Cummings present a classic locked room mystery, he adds another layer of intrigue when the location of the murder weapon is just as impossible as the crime itself. With an elegant and satisfying solution, The X Street Murders is one of the best examples of the genre.

The Mystery of Room No. 11 by Nicholas Carter
Willie Gray sees his mother enter a tenement, and follows her in. To his surprise, she has vanished from the building despite the lack of possible escape routes...

The mystery at the heart of Room No. 11 hinges on a simple case of incompetence by one of the key characters. It is an unbelievable mistake that undermines the story.

The Man Who Disappeared by L.T. Meade and Robert Eustace
Though warned of the dangers involved, Oscar Digby enters the house of suspected crooks. The house is surrounded and continuously watched, but Digby does not emerge. When the police turn the place over looking for him, there's no sign of his presence at all...

Though it does involve a disappearance, the simplicity and predictability of the method would suggest The Man Who Disappeared was never written as a locked room mystery. There's a growing sense of foreboding throughout, but the ending lets down the intriguing concept.

The Invisible Man by G.K. Chesterton
An invisible assailant seems to be able to appear and disappear at will, leaving a murderous trail in his wake.

One of Chesterton's Father Brown stories, The Invisible Man is an impossible crime that falls into the common trap of requiring complete incompetence on the part of the witnesses. Not one of his finest entries to the genre.

The Adventure of the Man Who Could Double the Size of Diamonds by Ellery Queen
When a scientists claims he can grow diamonds, a syndicate is formed to test his claims. Despite thorough searches when he enters and exits his workspace, the diamonds mysteriously disappear.

A simple mystery that (literally) challenges the reader to work out how it was done. The concept is quite abstract, but the solution so basic that the mystery is somewhat undermined.

The Mystery of the Lost Special by A. Conan Doyle
Story and full review available for free here.

Featuring a very brief cameo from an un-named enthusiast, Doyle's story features an intriguing concept that doesn't quite satisfy in its conclusion. The solution was adapted for the Sherlock S03E01 episode with a vanishing carriage in the London underground.

Off the Face of the Earth by Clayton Rawson
A corrupt judge enters a phone booth under surveillance by a team of police. Despite their gaze never leaving the box, the judge vanishes. He even has the cheek to miraculously call the phone when the police go to investigate.

A strong concept with a simply and rewarding solution, Off the Face of the Earth manages to explain the seemingly impossible with ease. One of the best stories of The Great Merlini.


The Grinning God & The House that Was by May & Jacquess Futrelle
Story and full review available for free here.

A two-part story that builds the impossible scenario in the first half and explains it in the second. A nice format which is slightly let down by the simplicity of the mystery.

Thin Air by Bill Pronzini
A private eye is tasked with tailing a mark who then mysteriously vanishes from his car.

Solution is simple but not overly so, and does a good job of building curiosity.

Elsewhen by Anthony Boucher
An inventor creates the first time machine, then gets in to trouble as he uses it for nefarious means.

A time travel story rather than a locked room mystery, this suffers from the same plot paradoxes as most featuring time travel.


Many of the early entries prioritise milestones in the genre rather than the quality of the mysteries, but the anthology hits its stride in the latter half.

Death Locked in is available in paperback from Amazon (UK) and Amazon (US).
Posted by Unknown at 1:12 PM