Sir Claud Amory turns off the lights in a locked room full of suspects. When the lights come back on, he is dead. Who killed the notorious inventor, and why?

Having just completed its run at the Bord Gais Energy Theatre in Dublin, the classic Agatha Christie play is moving to the UK from August through to November (dates and locations here). In this production, Jason Durr stars as the unflappable Detective Poirot as he investigates the various suspicious characters surrounding Amory's death. 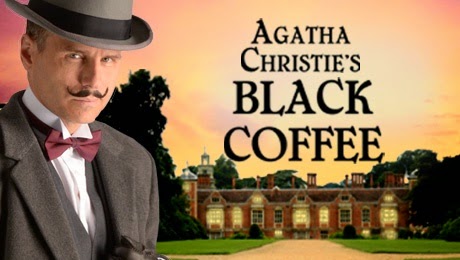 Sporting the infamous upturned moustache, Durr makes for a convincing Poirot. Called in to investigate the crime, he steals every scene with a nod and a wink. Though the majority of the plot stays firmly in mystery territory, the seriousness of the crime is matched by the play's humour - and many of the best lines go to the leading man.

The supporting cast are also strong, particularly Liza Goddard as the rambling Caroline Amory. That being said some of the accents do waver, with the supposedly Italian characters the worst offenders. It's a minor quibble to a lavishly set and performed piece that does well to engage the audience throughout.

Upon release in 1930 the play was warmly received, though it is now showing its age a little. The central plot is very much mystery-by-numbers, which is far from Christie's best. Given the wealth of ingenious stories from the genre-defining author, it is a little disappointing that this is the one chosen for a modern theatre run. The final reveal of the culprit falls very much into "oh, is that it?" territory, and may disappoint the modern audience expecting a more inventive twist.

The tone is set light, and the self awareness of the script definitely helps to elevate it above the standard mystery fare. It's a shame the plot isn't particularly groundbreaking, as the convincing production values and cast deserve better.


An (almost) impeccably performed interpretation of a conventional mystery story.
Posted by Unknown at 3:23 PM