The Mysteries of Reverend Dean by Hal White

Featuring six short stories, The Mysteries of Reverend Dean follows the exploits of the titular Reverend as he encounters and solves seemingly impossible crimes. 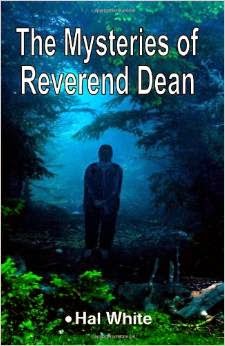 Set in the fictional town of Dark Pine, the book very much follows the "Miss Marple" format - the retired pastor filling his time with the various transgressions of his army of contacts. Similar to the Christie books, the main character's primary motivation is an unquenchable curiosity. The Reverend is a likeable pensioner who seems to have built quite the following during his working life. Hal White masterfully balances his leading man on just the right side of doddery, with an earnest and kind demeanour that turns to stern when the situation necessitates.

The Reverend's profession plays into the plot, with many of the mysteries originating from members of his church. It also allows White to include a few short sections on Christian philosophy, though he wisely opts not to over-do these interludes. They provide a little depth to the Reverend's belief structure, but are not overly intrusive for readers of a different persuasion.

The mysteries themselves are each unique and well thought-through, though White does have a habit of throwing in a few unnecessary details at the end to tie up loose ends. The Reverend's fatherly interaction with his community keeps the tone light, and the brevity of each story makes for an easy read.

Murder at an Island Mansion
Three siblings are murdered in quick succession. Each time - first on a beach, then on a freshly painted floor, and finally in a muddy pond - the killer leaves no footprints. With a vast inheritance and the lives of the remaining family at stake, Reverend Dean is the only one who can decipher the mystery.

Introducing us to the Reverend as his amiable method of detection, this story offers several impossible crimes within a single tale. A lack of footprints leading to the body is a classic device for such mysteries, and Hal White offers us three imaginative solutions to the same problem.


Murder from the Fourth Floor
A man is shot in plain view of a police officer. The bullet trajectory leads to the locked apartment of the man's estranged wife, but she is nowhere to be found. How can she have escaped the apartment unseen, and why?

It is very easy for impossible crime stories to overcomplicate a story, and unfortunately Murder from the Fourth Floor suffers greatly because of it. The solution is particularly contrived, with a few superfluous details towards the end that attempt to plug the various plot holes. The tale leaves the reader asking why the shooter would construct such an elaborate plan when something simpler could have achieved a more convincing result.

Murder on a Caribbean Cruise
Shortly after a man is thrown overboard by a disguised assailant, a woman is found hanged in a locked cabin.

Relocating to a cruise ship offers an interesting setting for a locked room mystery. Though it does take a little time to get going, Murder on a Caribbean Cruise is an engaging story with an elegant solution. The murder method does share some noticeable similarities with that of Murder from the Fourth Floor, but simplifies the concept to just the core mechanic.

Murder at the Lord's Table
Following a series of biblical warnings, a local pastor dies in full view of his congregation.

One of the shortest stories in the collection, Murder at the Lord's Table is also one of the simplest. A disappearing Jesus doppelganger adds a little more to the mystery, but features a somewhat disappointing explanation. Though the crime itself is fairly straightforward, Reverend Dean's investigation techniques entertain as ever.

Murder in a Sealed Loft
A woman is found stabbed behind a triple-locked door. With no way to seal the building from outside, how did the killer escape the scene?

The set-up is a classic one - a body is found in a locked room that has been sealed from within. Murder in a Sealed Loft offers two solutions to the puzzle - each as ingenious as each other - before confirming which best fits the nuances of the crime. A tightly written story that wastes little time demystifying the genre staple.

Murder at the Fall Festival
The victim is found suffocated in his own garage. Not only is the room locked, but there are a number of witnesses in full view of the door.

While the method of the crime is apparent fairly early on, the killer goes to great lengths to establish an alibi. These methods rely on a detailed knowledge of the post mortem procedures, which the reader is conveniently led through as part of the investigation. Focusing the case around forensic evidence detracts from the locked room aspects of the story, though the Reverend's ingenuity provides some compensation.


A varied selection of modern impossible crime tales with a likeable if inoffensive leading man.

The Mysteries of Reverend Dean is available on Amazon (UK) and Amazon (US), and can be purchased in paperback or ebook format. More information on the book and its author can be found at www.HalWhite.com.