There aren't too many examples of locked room mysteries in modern movies, but Inside Man gives us a great one.

The film follows Clive Owen's Dalton Russell as he pulls off "the perfect bank robbery". Russell is pitted against Detective Keith Frazer, a likeable and world-weary negotiator played by Denzel Washington. 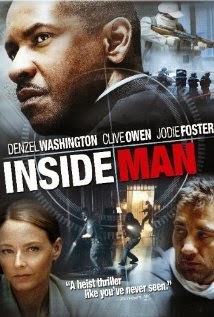 Wasting no time getting to the crime itself, Inside Man shows us the action from both inside and outside the bank. Russell and his team of thieves manage the hostages and execute their plan as Frazer and co. set up perimeters on the surrounding streets.


The plot features two mysteries - one the viewer is privy to, and one that we're not. The first centres on Dalton's team. (Minor spoiler) By dressing each of the hostages in identical clothing and continually rotating people within small groups, each member of the team is verified as a hostage by members of the group. When the team exits the bank alongside the hostages the police have no way to differentiate criminal from innocent. It's a clever mechanic that makes us ask the more pertinent question - if each member of the team escapes without any loot, then how can they actually rob the bank? (End of minor spoiler)

This leads in to the second mystery, which is strongly hinted at but not revealed until the end of the movie. While the solution isn't completely original (for example the methodology also featured in Jonathan Creek s01e02), the bank setting and assistance from Dalton's team does maintain the novelty. 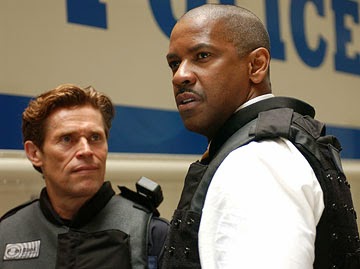 The method of robbing the bank is an intriguing concept, but it is Washington's Detective Frazer that steals the show. Frazer is our "Watson", following events with the audience and trying to piece together Dalton's plan. Often this role is delegated to a less intelligent character to maintain the mystery for the viewer, however Frazer is far from dumb. He quickly realises that following procedure is exactly what the robbers are looking for, while turning Jodie Foster's calculating influence to his advantage.

The cast are strong throughout, though Clive Owen's tends to mumble with a wavering American accent (a trait that is only exacerbated by the fact that he is wearing a mask for the majority of the movie). Supporting roles from Jodie Foster, Christopher Plummer and Willem Defoe add pedigree to proceedings, and the ever reliable Washington wisecracks with ease.

The tone of the movie wobbles a little towards the end, trying to blend the more traditional bank heist vibe with detective noir. It is much more successful mixing in the semi-political scheming of Foster's Madeline White, and perhaps should have toned down a little of Spike Lee's directing flair.

All told Inside Man is a solid bank heist thriller, using techniques from the locked room genre to add intrigue to the drama.

7/10 - High production values and a heist method worthy of it.

Inside Man is available on DVD from Amazon (UK) and Amazon (US).
Posted by Unknown at 10:00 AM