Now You See Me Review

Magic and impossible crimes share many of the same characteristics - both bending our perception of reality to accomplish the seemingly impossible feats. Now You See me happens to share staples more than most, following a group of magicians (The Four Horsemen) as they steal millions of dollars, outwit the authorities, and entertain the public with outlandish shows. 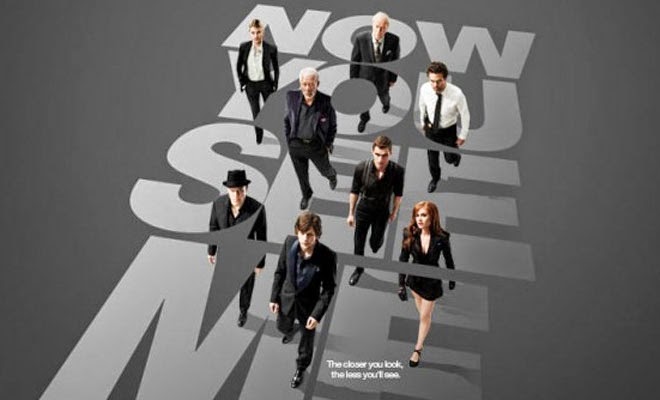 Starting in Las Vegas and ending in New York (by way of New Orleans), the plot centres around three heists committed during the Horsemen's live stage performances.

In the first, they mysteriously teleport an unsuspecting witness to his bank in France before showering their audience with the vault's content. In the second, they hack the bank account of a millionaire and wire his money to the individual accounts of their audience members. Finally, they steal a reinforced vault from within a warehouse and use the cash within to frame an unfortunate pleb for their crimes.

Each of the robberies require a significant suspension of disbelief, however the first and third both use techniques familiar to locked room fans. The film glosses over them quite quickly in its rush to display the glamour of the magic shows, though does feature some satisfying twists. The car chase in the final third of the movie in particular features a clever mechanic (the plot kind, not the automotive kind) that adds a "whodunit" element to the concluding heist.

Speaking of whodunits, the film teases the possibility of a mastermind behind the magicians' antics, a "fifth Horseman". A few characters are highlighted as potential candidates before the culprit is revealed at the end of the film. Unfortunately this fits very much into the "least likely suspect" that doesn't bother itself with believability or logic. The movie may have benefitted from avoiding this aspect altogether as it is both unnecessary and groan-inducing.

On a more positive note, the cast seem to be having a ball. The star power has to be seen to be believed - Jesse Eisenberg, Woody Harrelson, Mark Ruffalo, Morgan Freeman and Michael Caine all feature, with up-and-comers Melanie Laurent and Dave Franco also contributing. Production values match the talent on show, though reducing the amount of CGI during some of the magic tricks may have improved their believability.

A sequel is reported to be in the works, with filming beginning in September this year. Many of the original cast are rumoured to be returning, and it will be interesting to see how the creators up the stakes from the first outing.


8/10 - Flashy, inventive and entertaining, but slightly let down by a face-palmingly implausible twist ending.

Now You See Me is available on DVD from Amazon (UK) and Amazon (US).
Posted by Unknown at 8:00 AM