Locked Room Mysteries In Real Life - The Duel Of Shadows

The reveal - explaining of how the events occurred - is often the most rewarding part of a locked room mystery or impossible crimes story. The key to an edifying ending is ensuring the method is both ingenious and feasible. While there have been a huge variety of solutions proposed by the multitude of authors operating within the genre, very few have been replicated in reality.

As with any fiction, the methodologies don't have to have happened to be creditable. The audience just have to believe that they could happen. Maintaining realism is key to keeping the reader engaged with the story - if the world of the story operates within the same laws as our world we have a fair chance of figuring out the solution prior to the reveal.

Perhaps it is the somewhat contrived nature of the genre that means crimes are rarely attempted outside of fiction. Stories tend to overcomplicate what could more easily be accomplished in an attempt to provide the reader with a fulfilling story.

That being said, there are a few impossible crime stories that have striking similarities to real life events.

The Duel of Shadows by Vincent Cornier


The Duel of Shadows is a short story, originally published in Pearson's Magazine in 1934. Written by Vincent Cornier, it covers the inexplicable shooting of Henry Leonard Westmacott who was seemingly attacked by an invisible assailant while dozing in an armchair. 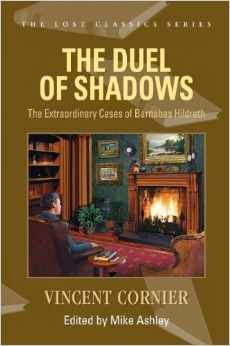 As an impossible crime setup the story works well, with a few choice details (the bullet that hit Westmacott was fired over 200 years previously, and a "fog" appears on any attempts to photograph the slug) providing interesting colour to the tale.

In an eerie turn of events, the way that Wesmacott was shot (the bullet was wedged in a decomposing log in his fire and was propelled into its unexpecting victim when the explosive gasses trapped inside met the flames) was to be repeated in reality when a freak accident killed a young woman.

In his article "Optical and Physical Effects of High Explosives", scientist Robert Williams Wood explains how the woman was killed by a pellet expelled from her furnace:


"...dynamite cap or detonator used for exploding the dynamite charges
in the mines, which, by some carelessness on the part of a miner,
had been delivered intact along with the coal." Source (via Wired.com)

The similarity of fiction and fact is only increased by the proximity of the events - Cornier's story was released in 1934, and Wood's paper was published in 1936.

The Duel of Shadows is available as part of a Cornier collection of the same name, or the Mammoth Book of Perfect Crimes by Mike Ashley.