Therese and Germaine by Maurice Leblanc

A man is found alone in a locked cabin, stabbed in the back. When the murder weapon is later found in his wife's bag, all fingers point to her... 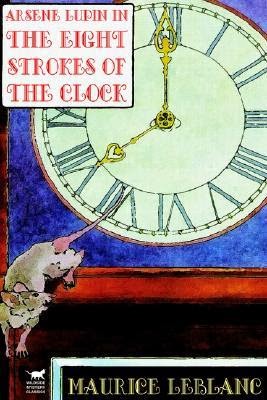 This locked room mystery is one of a selection of short stories available in The Eight Strokes of the Clock by Maurice Leblanc. The book follows the exploits of adventurer Serge Renine and his companion Hortense Daniel as they investigate bizarre and intriguing mysteries. Leblanc introduces the book by saying the stories were told to him by Arsene Lupin, a fictional character from Leblanc's other works. Given the similarities Leblanc suggests that the resourceful adventurer may in fact be Lupin himself.

The book was selected by Ellery Queen as one of the top 125 most important detective/crime/mystery fiction works, and features eight stories which I will cover in more detail in a separate post. Therese and Germaine is one of only a couple of locked room mysteries within the collection, however the other stories are well worth a read for mystery enthusiasts.

The short story is available in its entirety for free at Project Gutenberg or WikiSource. If you want to read on your Kindle you can download it here (send to Kindle instructions here).


Therese and Germain takes a little time getting to its core mystery, choosing instead to focus on the characters involved and the impending nature of the crime. The set-up is a little contrived (Renine overhears the would-be-murderers plotting their crime on a train), especially considering Renine hears just enough to confirm that a crime will be committed without learning who the victim or attacker will be.

Once the story does arrive at its conundrum - a man is seen entering his waterfront cabin alone, then is found stabbed in the back with the door locked behind him - the story strides along at a confident pace. The solution is revealed shortly after, and while it may be simplistic it is supported by an intriguing passage on the motives behind the mystery.

Renine is an engaging character to follow, and his ability to command the situation (particularly towards the end of the story) is both enjoyable and engrossing to read. His infatuation with his companion (Hortense) may detract a little as she seems to exist only to act confused and confirm what we know to be impossible, Watson style.


5/10 - A simple but effective locked room mystery elevated by an engrossing lead character.

Therese and Germaine is available as part of The Eight Strokes of the Clock short story collection from Amazon (UK) and Amazon (US).
Posted by Unknown at 7:00 PM